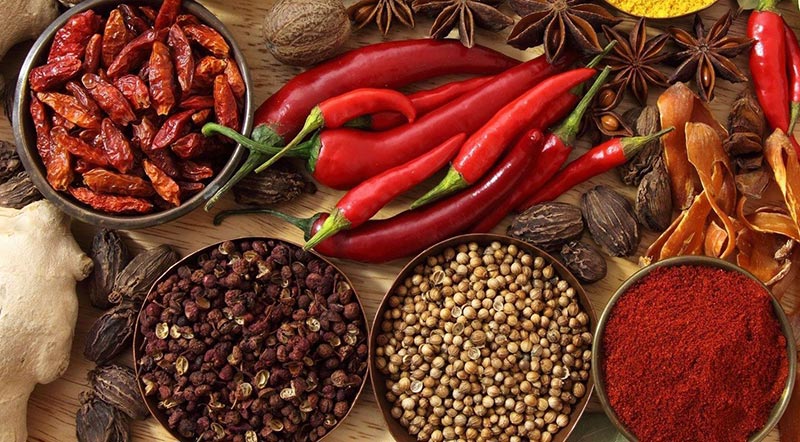 If you want to create an authentic Chinese dish, you have to use traditional Chinese cooking ingredients. Chinese spices and sauces are usually used in small quantities to enhance the recipes, they offer subtle flavour, depth and sometimes a kick that you can't get from other cuisines.

If you're thinking of stocking your kitchen cupboard with a selection of Chinese cooking essentials, then, keep reading to learn about some of the common Chinese spicesand sauces we think are crucial to Chinese cooking.

Note: This list doesn't cover ingredients for cooking Indian curries; watch out for our guide to Indian ingredients and spices.

Here is a list of ingredients for Chinese cooking so that you can cook an authentic Chinese meal on a moment’s notice.

Allspice
Allspice  is dried unripe berries of plants in Jamaica. It is mostly used in Caribbean cuisine though the usage has spread all around the world. Allspice is a great substitute for five spice powder because it tastes similar to a blend of several spices such as cinnamon, nutmeg, and cloves.

Chinese Five Spice Powder
Chinese 5 Spice Mix is the penultimate of Chinese flavour. It gives aromatic and exotic taste that is distinctly Chinese to your dishes. This spice mix consists of ground cinnamon, star anise, cloves, fennel seeds, and Sichuan peppercorns. The spice blend and recipe will differ based on the recipe from each brand and seller. You can use it in various ways. You can add it in stir fry, fried foods, and stews. It is particularly delicious when you use it as a dry rub for any meat before roasting them. The famous Peking Duck is one example of great dishes using Chinese Five Spice Mix. If you cannot find Chinese Five Spice Powder, you can try to create your own blend or substitute it with Allspice.

Red Chilli
Sichuan regional cuisine uses a lot of chilli in their dish to create strong and bold flavour that is markedly different from Chinese cuisines from other regions. Some of the Sichuan dishes such as Kung Pao chicken uses whole dried chilli while other dishes use chilli powder and chilli oil. In Sichuan, chilli is usually combined with Sichuan peppercorns to produce hot numbing flavour. Be careful not to use too much chilli in your dishes so as not to overpower the other flavours.

Fennel seeds
Whole Fennel Seeds the predominant flavour of Fennel seeds is hot. Aside from the seeds, fennel stems and leaves are also used in Chinese cuisine, particularly in dumplings and steamed buns. If you use whole Fennel seeds to cook slow cooking food, remove them after an hour or two to prevent the dish becomes bitter. Fennel seeds are believed to have some medicinal properties and it is part of the spices in Chinese Five Spice Powder.

Cloves
Cloves are one of the ingredients in five spice mix. Cloves taste and smell very strong so you only need to add a little to your dish to give it a boost of flavour. Cloves in Chinese dishes are mainly used in pickling, baking, stews, and braised meat. In Chinese medicine, Cloves are beneficial to warm the body, as antiseptic, and as treatment for digestion problems.

Star anise
Star anise is one of the most prominent spices in Chinese dish. It is especially important in braised dishes such as Chinese braised oxtail and Lanzhou Beef Noodles. It is also used in Chinese Five Spice Powder. To use star anise in your cooking, simply drop a few pieces of it in the cooking process. Choose Star Anise that retains it star shapes and store them in sealed container to avoid losing their flavour.

Sesame Seeds
Sesame Seeds are the staples of Chinese kitchen. Sesame Seeds are used to make savoury, sweet dishes, and even candies. They add crunch and savoury flavour to the dishes. Use toasted sesame seeds or toast them yourself to make the flavour stronger. Sesame seeds store well in the pantry so you can purchase them well in advance and store them for future use. Some of the most popular dishes which use sesame seeds are Sesame Seeds Chicken and Sesame Balls. Chinese cuisine also often uses sesame oil so always have a small bottle of sesame oil in your kitchen to add authentic Chinese flavour to your dishes. When you are buying sesame oil, keep in mind that toasted sesame oil and sesame oil will tastes different.

Turmeric Powder
Turmeric is an essential part of Chinese medicine. It has numerous benefits such as anti inflammatory and prevent cancer. Turmeric tastes peppery, warm, and bitter. Northern China uses turmeric more than Southern Chinese. It is an important spice in curries because it gives the dish the distinct yellow colour and flavour. Use turmeric in moderation to prevent your food becomes bitter.

Mustard seeds
Whole Mustard seeds will add some kick to your food with its sharp horseradish-like taste. It combines with other spices with strong flavour. Chinese food usually tastes mild so do not add too much Mustard seeds as it will overpower the other flavours. If you want a slightly different flavour, you can try to toast the seeds to bring out its nutty flavour before adding them to your food.

Lemongrass
Chopped Lemongrass is mostly used in South East Asian dishes, but has found its way to Chinese food. Lemongrass tastes fresh, aromatic, and lemony. It is delicious in soups and seafood dishes. Lemongrass is best when it is fresh, but if it is not available, you can use dry Lemongrass or powdered Lemongrass.

Cumin Seeds
Many Asian and Western dishes use Cumin Seeds in their dishes so it is handy to always have some in your pantry. Cumin has complex and bold flavour and is one of the main ingredients in a curry mix. To get the best taste of Cumin, roast the seeds and grind them with a mortar and pestle.  Cumintastes great in lamb or beef stir fry.

Galangal
There are two major types of Galangal, the one that originates from Indonesia and the one that originates from Thailand. Although they look similar, they do not taste the same. Indonesian Galangal tastes sharp and pine-like while the Thailand variety tastes pungent and peppery. The type of Galangal that is usually sold in the West mostly comes from Indonesia. Galangal is used in curry and soups. If you use slices of Galangal in your dishes, remove them before serving because the texture is inedible. Even hours of cooking will not soften it.

Ginger Root
Chinese people love Ginger. They use ginger in just about anything: congee, stews, stir fry, soups, sweets, and desserts.  Ginger, scallion, and garlic are the dominant flavours in Cantonese cooking. Chinese cuisine usually uses fresh young ginger that is sliced thinly instead of ground ginger. The most prominent dish with strong ginger component is steamed whole fish. Aside from adding flavour to the dish, the ginger also absorbs the fishy aroma making the dish tastes fresh and clean. Ginger tea is lovely when you have cold and in need of warmth.

Lime Leaves
Kaffir Lime Leavesgive strong zesty lime aroma to any dishes. It is mostly used in Cambodian, Thai, and Laotian cuisine though it has made its way to Chinese food. Add some of them whole to your dishes like you add bay leaves and remove them before serving.

Did we miss any of your favourite Chinese spices and herbs? What do you like to keep on hand for cooking Chinese, Japanese, Thai, Vietnamese, Korean, or other Asian cuisine?

Top 10 Valentine's Day Gifts: Perfect gifts for him or her