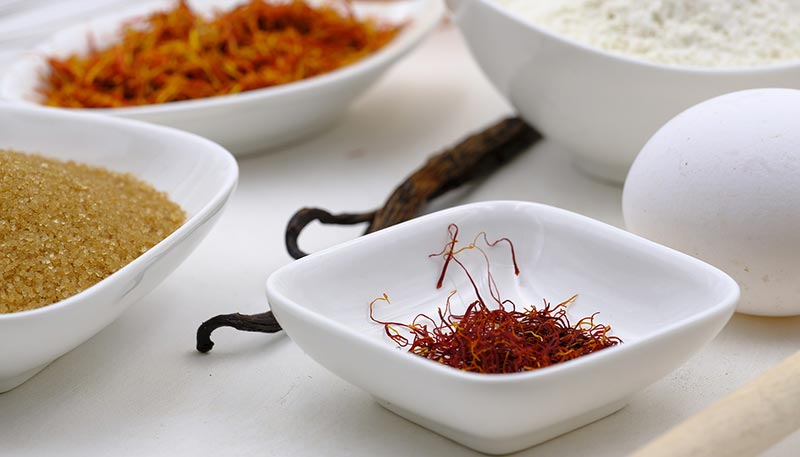 Most countries in the Middle East use a range of spices and spice blends such as Zahtar (Za'atar) and Ras el Hanout. Typically, a stew will include a small amount of cinnamon, cloves, cumin, and coriander. Pepper is common, and chili peppers are used occasionally as a separate sauce or as a pickle. Herbs such as parsley and mint are commonly used both in cooking and in salads.

Ras el Hanout is a North African spice mix, similar to Indian’s Garam Masala.  It is typically associated with Moroccan cuisine though other cuisines in the region also use this spice blend. Smoked paprika means “top of the shelf” meaning that the spices in this blend are the best ones that a spice shop has to offer.

The recipe for Ras el Hanout depends on the region and the company who makes it. However, there are some common ingredients among the blend. Ras el Hanout usually contains mix of cardamom, cloves, cinnamon, coriander, cumin, paprika, mace, nutmeg, peppercorn, and turmeric. Some more exotic blends contain ash berries, Grains of Paradise, rosebuds, cubebs, and chufa. Ras el Hanout tastes very warm and aromatic, but not spicy. You can add it to meat, rice, or stews. It is especially delicious on tagines, Moroccan famous meat stews. Ras el Hanout goes well with most savory dishes and it is handy to keep some in the pantry to add exotic flavor to your food. For a simple serving suggestion, you can mix this spice blend with some sour cream or softened butter to create an interesting topping. You can even toss it with fresh popcorn to create exotic and unique tasting popcorn.

Za'atar
Zahtar (Za'atar) is a traditional herb blend that is ubiquitous to Middle Eastern cuisine. It used to be made only with Za'atar leaves, but since the plant becomes an endangered species and there is limitation on its harvest, this herbs and spice mix are usually made with herbs.

Zahtar gives a strong herbal taste, and depending on the mixture, it also has nutty, tangy, and toasty taste.  Zahtar is great for meat and vegetables. Some people mix it with olive oil and marinade olives in it or spread it on pita bread. You can also stir into labneh or Lebanase yogurt.

Smoked Paprika Paprika is made from ground red pepper. The red pepper is usually dried and then ground. To make Smoked paprika, the peppers are usually smoked dried before crushed. The process add intense smoky flavor to the paprika. Paprika and Smoked paprika is used by most cuisines around the world because its ability to enhance the flavor of any type of dish.

Smoked paprika is usually not very spicy, though it depends on the brand. Each company use different variety of peppers so the level of spiciness may vary. The purpose of this spice is to add a bit of heat, color, and smoky taste to your food. Smoked paprika is a very versatile spice and is used by many cuisines around the world, which is why it should be a staple on every kitchen. Rubbing it to meat as a marinade or adding it to stews will give your dish a lot of flavor and warmth.

Sumac
Sumac comes from ground dried berries of Sumac bushes. Sumac is usually sold in coarse ground form. However, there are some stores that sell whole sumac berries. Sumac is believed to have some medicinal properties such as reducing fever and stomach upsets.

Sumac is widely available in Middle Eastern spice stores online. However, if you can’t find sumac, you can replace it with lemon zest with a little bit of salt. Sumac is one of the main ingredients of Za'atar. Sumac is tart and tangy like lemon, but more balanced. It is good with salad, rice pilaf, chicken, fish, or as a dry rub and marinade. The simplest way to use sumac is to sprinkle it on hummus or other dips.

Cumin
Cumin grows naturally in the Nile Valley. It has been used as spices for a long time, especially in Middle East. Cumin has a strong aromatic flavor and is best when used sparingly. It is an important ingredient in traditional Middle Eastern Spice blends such as Baharat, Ras el Hanout, and curry powders around the world. You can buy ground cumin or whole cumin seeds. If you buy whole cumin seeds, remember to toast them lightly before grinding them to bring out their flavor. Cumin in Middle East is used in many dishes: salad, hummus, couscous, meat, tahini, and chick pea spread.

Cardamom
Cardamom in Middle East is mostly used in teas, coffees, and sweet dishes. Saffron and cardamom are essential ingredients in real Arabic coffee. It has a very unique flavor and aroma that is not easy to describe. The closest words to describe cardamom are strong, aromatic, and delicate. Cardamom is also widely used in spice mix such as Baharat and Ras el Hanout to cook savory dishes.

Cardamom is sold in pods or in ground form. It is recommended to buy cardamom pods because they retain their flavor longer. Before using the green cardamom pods, press each pod down with knife to crack it open and take out the seed.

Fenugreek is used in many Middle Eastern curries and chutney. Hilba from Yemen and Ghormeh sabzi, the Iranian national dish, are some popular Middle Eastern recipes that incorporate fenugreek.

Aside from its flavour, fenugreek is used for its numerous medicinal properties. Fenugreek can help reducing fever and alleviates coughing. It is also used to treat allergies, bronchitis and congestion.

Saffron
Saffron is the most expensive spice in the world. Saffron comes from the style and stigma of saffron flower or Crocus sativus flowers and must be handpicked one by one and dried. It takes thousands of stigmas just to create an ounce of saffron. Fortunately, you only need to add a little to get its color and taste.

It is better to buy saffron threads rather than in powdered form because it loses its potency quickly. Real and high quality saffron is expensive so beware of cheap ones, especially with bright orange colors. They might be fake.

Saffron gives unique floral and musty taste that is irreplaceable. If you do not have saffron at hand, you can omit it altogether. Sometimes people use turmeric to get the yellow color in their cooking but turmeric tastes completely different than saffron.  It is better to have some real saffron in your pantry. Saffron does not spoil easily; you can keep saffron threads up to a few years.

Aside from Middle Eastern dishes, saffron is also used on many regional cuisines. Some of the most popular dishes with saffron are Spanish rice paella, risotto, and Bouillabaisse. To get the best result when cooking with saffron, you need to steep saffron in a little warm water for about 30 minutes. You can also steep the threads in milk, stock, or white wine if you want. Add the liquid and the saffron to the dish towards the end of cooking.

Caraway
Caraway seeds looks similar with cumin, but it has distinct flavor from cumin. You can buy ground or whole caraway. Caraway is mostly used in Northern African cuisine to produce a spicy flavor. It is also added to Harissa, Tunisian pepper paste.

Caraway is often used for baking purposes such as in caraway seed cake and caraway bread. In Middle East, Caraway pudding, a Ramadan’s popular dessert, and Keleacha, a Syrian sweet scone, are some popular baked goods that use caraway seeds.
Aside from flavoring dishes and baked goods, caraway is high in anti oxidant and is believed to have many medicinal qualities.

Clove
A whole clove is an unopened flower bud from a clove tree.  Cloves are sold in whole or in ground form. It has a warm and pungent flavor that is very different from other spices. Cloves have very strong aroma. A little goes a long way when it comes to use cloves in cooking. Adding too much cloves can easily overpower other spices.

Clove are used in various dishes, drinks, and tobacco. In Middle Eastern cuisine, cloves are found in the basic spice mix such as Baharat and Ras el Hanoutt. Whole clove are also used in rice dishes. Cloves have many medicinal properties such as easing toothache and warm the digestion.

There are many health benefits associated with aniseed, especially as digestive aid. In India and Middle East, many people like to chew aniseed after meal to sweeten the breath. Other healing properties are for treating nervous asthenia, migraines, vertigo, rheumatism, cough, bronchial asthma, gastric pains, and slow digestion.

Nutmeg
Nutmeg and Mace come from the same tree from the island of Moluccas. Nutmeg comes from the seed while Mace  is the flesh of the fruit. Nutmeg is one of the most popular spices in the world these days and you can find it at any grocery stores. You can purchase ground nutmeg or whole nutmeg. Fresh whole nutmeg will have stronger flavor than ground nutmeg. If you buy whole nutmegs, grate it directly to your food during the cooking process.

Nutmeg has warm spicy and sweet flavor. In most part of the world, nutmeg is usually used in sweet dishes. However, in Middle East and Indonesia, nutmeg is often used in savory dishes such as soups and stews.

Baharat Seasoning
Baharat means spices in Arabic. It is an all purpose spice mix for Middle Eastern cuisine that you should always have in hand because it is the most practical way to add Middle Eastern flavor to any dishes. Baharat seasoning will give aromatic, warmth, and exotic taste to your dishes. Baharat seasoning is used to cook lamb, fish, chicken, beef, and soups.

Baharat seasoning typically consists of coriander seeds, black pepper, cinnamon, cloves, cumin, cardamom, nutmeg, and paprika. There are some regional variations of Baharat. In Turkey, Baharat also contains mint, while in Persian Gulf, saffron and loomi are added to the spice mix. Each company creates its own Baharat secret recipe so try out different Baharat spice blends or create your own.

Baharat Spice ,mix is usually sold in ground form. If you want to create a paste for marinade from Baharat, mix it with olive oil or lemon juice to get the consistency you want and rub it onto the meat. Depending on the brand you use, Baharat spice mix is very aromatic. A teaspoon or two is usually enough for a dish.

The simplest way to enjoy Baharat is to sprinkle it on pita bread. Brush olive oil on the pita bread and sprinkle a bit of Baharat seasoning on it. Bake it for about 10 minutes and you will get delicious and exotic pita bread.

Peppermint and Spearmint
Peppermint and spearmint are popular herbs in Middle East and Mediterranean cuisines. Peppermint has stronger minty flavor than spearmint and is often used in candies. Spearmint is more widely available and used in savory dishes. However, they don’t taste very different and you can use either one.

Peppermint and spearmint can be used in drinks, salads, sweet dishes, yogurt, as well as meat dishes. Mint is especially good with lamb. Aside from savory dishes, peppermint and spearmint are also popular as tea, especially in North Africa. One of the most popular drinks in Middle East is limonana or mint lemonade.  Making limonana is very easy; simply mix freshly squeezed lemon, mint leaves, water, and sugar.

Top 10 Valentine's Day Gifts: Perfect gifts for him or her